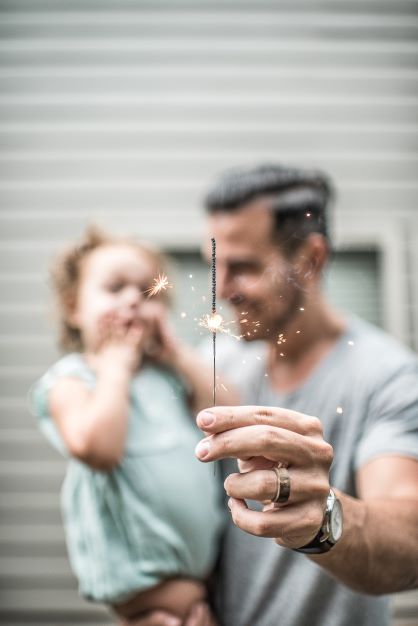 Hitting toddlers makes no sense. At this age, children are too young to be responsible or "guilty" for misbehaving. Their behavior may be aggravating, but you must remember this: because these youngest children depend on their parents and loved ones for their very survival and safety, it's especially frightening and confusing when they are hurt physically and emotionally by them. To them we are huge in size, and become truly monsters when angry and violent. By striking them we teach them that it's acceptable to use force on another person, a lesson they will likely follow later with their own children.

The very behavior we disapprove of may be their attempt to communicate. Acting badly and negatively may really mean that the child wants more independence (a natural development at this age), or is angry about something else in her life, maybe jealousy of a brother or sister, or the frustration of not having the skill to do something.

One source of conflict with young children may be our assumption that they understand more than they actually do. Their exploring and experimenting with new things may make us think they are purposely being naughty or destructive. When they pull the dog's tail, maybe they just want to see if it's stuck on or removable!

It's best to try and stay calm and find out what our child is trying to say. We should explain why her actions are not acceptable. Sometimes we are in a hurry, and it seems foolish to use up precious time to explain to a small child why she should obey us. But it's not a waste of time. It's a worthwhile and constructive investment in teaching your child how people should interact - reasonably and thoughtfully. So you may be running five minutes late, but what's more important?

In a straightforward situation, such as not sharing a toy or insisting on unacceptable television, distraction is good policy. Substitute another toy, encourage sharing with the other child, find a better TV show, go to another room and play a game. Toddlers can be guided out of a temporary preoccupation. If she just won't stop for anything, use "time-out". Remove her to a quiet (no TV) neutral space, e.g. her bedroom or corner of the playroom (no toys). Ask her to be quiet and thoughtful for a couple of minutes, and then let her come back. Always make sure that she understands that you still love her, and are trying to help her learn to behave well. She should understand that you are concerned about her behavior, but that you are not rejecting her.

The above information is an excerpt from "Parenting Through All the Ages and Stages" (2000), a Massachusetts Citizens for Children publication.

A safe environment prevents problems and helps make living with an active toddler less stressful. Toddlers have a short attention span and do not plan their behavior. They do not learn from being spanked or yelled at. Such punishment breaks the trust that young children have in parents and caretakers.

For example, child-proof your home by covering electrical outlets, storing breakable and dangerous chemicals and medicines in safe places, and providing a fenced-in yard.

Children should not be spanked when they touch or explore dangerous objects or run toward the street. The should be removed immediately from the situation and safety measures should be taken to avoid future problems.

For example, if a toddler is banging on the wall with a block making marks, try singing or showing him a book you will read (distracting) or try handing the child a soft toy for banging on the floor (redirecting).

Yelling and spanking, and even reasoning, do not work. Yelling and spanking may stop the child momentarily but it will not teach him new behavior, and it will probably make the parent/caretaker feel bad. Explaining why he shouldn't bang on the wall won't have much effect in the future, as he probably won't remember or understand your explanation. Your job is simply to get him to stop right now, and distracting and redirecting usually work well. Young children have short attention spans, and turn easily to new interesting happenings.

Establish consistent routines for eating, playing, napping, and bedtime, for example. Give children some warning of the activity that is coming, such as "It's six o'clock. Time for dinner."

Do not let each day dictate what the child needs or make the child's schedule fit the adults' schedules each day. A consistent routine helps children get their basic needs taken care of, helps them learn how to pace themselves, and helps prevent discipline problems.

Bothersome behavior, such as whining and crankiness, if it is not hurting himself or others, can often be eliminated by ignoring it. Threatening your child, arguing, nagging or spanking ususally serve only to increase the bothersome behavior, not curb it. For example, if your child is whining, calmly remind him "I cannot hear what you are saying when you whine. I can only understand when you speak in a quiet voice." and then ignore any further whining. It is important to be consistent.

Praise works well to increase the behavior we want to see more of. Tell your child "What a clean room!" when the toys are picked up, or "What a beautiful picture. Tell me how you did that!"

A cooling-off period allows the parent to calm down and the child to stop and think. Parents and caregivers should follow up the time out by talking briefly about the misbehavior and what behavior is expected in the future. For example, if a child hits her sister with a toy, remove her to a private place for no longer than five minutes. Do not spank, yell, threaten or nag. When she and you are both calm, say to her "It's not OK to hit your sister. Next time you need to ask her to play with her toy."

We want children to learn how to solve their own problems and to prevent future discipline problems that we have to deal with. Children don't often understand their misbehavior. You can help them think about alternatives and practice correct behavior.

For example, two preschoolers are fighting over a toy. The parent/caretaker has them both sit on chairs facing one another and puts the toy on the floor. When each is calm, the parent/caretaker explains the problem, asks each to say what happened without interruptions, and then asks each what could be done so each would have a chance to play with the toy. They take a few minutes each and a timer is set with the amount of time each gets to play with the toy. This would work better than taking the toy from both children, nagging at them to stop fighting, or sending home the visiting child.

Parents Helping Parents offers free and ongoing self-help groups to support families and prevent child abuse. Groups meet throughout Massachusetts and are open to all parents. Also runs a 9AM-5PM hotline for parents 1-800-882-1250.

Some parenting tips from Circle of Parents

Learn about effective discipline, without corporal punishment & spanking, and why spanking doesn't work, at the Center for Effective Discipline web site, www.stophitting.com